It’s 37 meters long but only 4 meters wide; it’s controlled by 27 PCs and includes eight Tecan Freedom EVO® workstations. It took the project team 23.7 man years to complete, during which time they traveled over one million kilometers and spent 4.5 years away from home. This is no ordinary laboratory instrument, but the new, fully automated genetic sample processing system (GSPS), a DNA analysis system that was specially commissioned for the Biology Unit of the South African Police Service’s (SAPS) Forensic Science Laboratory (FSL).

The SAPS receives crime samples from across a country that is twice the size of Texas – with only two laboratories in which to analyze them. This has led, unsurprisingly, to a backlog of cases waiting to be dealt with and the urgent need for an automated system to process current and past samples. Regular readers of the Tecan Journal may remember the announcement in 2004 of the award of an EUR 8.35 million tender to Tecan to provide, install and service this forensic DNA typing system. After years of planning, the project was finally completed in February 2006 and the system began the rigorous validations required before sample processing begins. The GSPS will be able to accept in excess of 800 samples for DNA extraction and further downstream processing in a day, significantly improving the speed at which DNA analysis results can be obtained.

Johann van Niekerk, a GSPS Operator attached to the Technical/Specialist Support section of the SAPS FSL Biology Unit, explained the mammoth scale of this project: “We’re moving into a new forensic laboratory in a refurbished building that was previously the Andrew McColm Hospital, in Pretoria.

This huge area has been fitted out and transformed to create a laboratory space with, for example, evidence recovery and manual DNA processing laboratories, administrative offices and support space. It also houses the automated GSPS, which covers three different laboratory spaces over a 40 m long by 6 m wide footprint.”

Christo Weitz, Project Manager for the GSPS, commented: “With regard to our requirements for a robotic sample processing system, we didn’t have to compromise at all on any of the specifications, because when we looked at Tecan’s proposal for the GSPS, it was abundantly clear that they understood exactly what it was that we wanted and they provided us with exactly that solution.”

The Tecan SAPS team, headed by Beat Glauser and largely based in Munich, has been working on this project since early 2004 and this massive platform was hardly a straightforward installation. The 37 m process line inhabits three restricted access spaces that operate in a cleanroom-like manner, each with ante chambers and its own separate, climate-controlled environment, to prevent chain of evidence breaches and cross-over contamination – the GSPS- related hardware alone took four weeks to install. However, the biggest challenge for Tecan was the inclusion of a number of third party instruments, such as DNA analyzers from Applied Biosystems, into the GSPS; all of these required full LIMS and control software integration, achieved by the Tecan team through rethinking, redesign and consultation. The final set-up is documented in 162 controlled Tecan documents and, incredibly, 149 third party manuals!

Robot fetches a rack with samples for further processing

Fitting the pieces together

The complete GSPS is run by 27 PCs and consists of four 6-axis articulated robotic arms on servo-driven tracks, running through three separate areas that are joined by inter-laboratory airlocks. 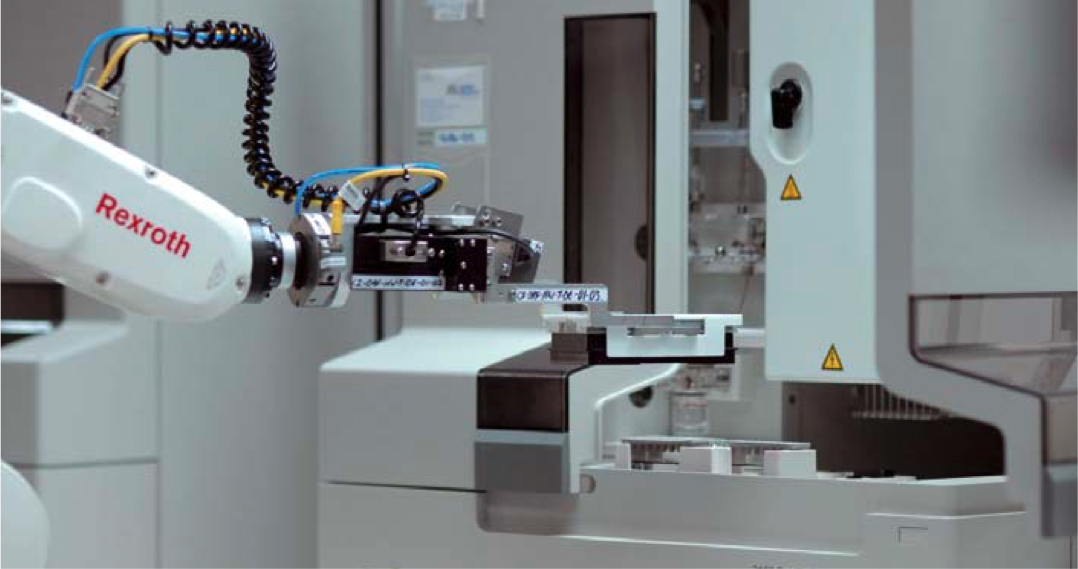 A delicate task: The fragment analyzer is loaded by the robot after base plate and top clamp are added

of which four perform cell isolation and DNA extraction steps, two perform PCR normalization and set-up, and two perform fragment separation set-up.
In addition, there are three thermal cyclers, three Applied Biosystems genetic analyzers (for fragment separation) and two sequence detection systems (for DNA quantification through to real-time PCR) integrated into the structure. Automated sample storage and retrieval systems also operate within the production line, as well as all the necessary equipment for cell isolation (such as centrifuges), laboratory plate support (such as Te-StacksTM, shakers and heaters), laboratory plate sealers and foil piercing instruments, ‘sandwich’ assembly systems for genetic analyzers, and various other laboratory essentials, all of which were supplied and incorporated into the system by Tecan and its local subcontractor, Vertex Automation.
The GSPS is made up of robotic workcells that are fully interlinked through integrated ‘islands’ of automation. Fully integrating all the processes into a single system is vital not only to the set-up and throughput, but also to the quality of data achieved. Performing the different analysis procedures manually separates them into a number of individual processes that are often carried out by different operators. This is not only much more labor-intensive and time consuming, but results in significant dwell times between the different process steps and the resulting variability can severely compromise the data, making them less comparable.

Tecan provided all the GSPS software, which works on three different levels for complete and seamless integration of all the components within workcells, between workcells and across the entire system. Tecan’s flexible assay composer and task scheduler (FACTSTM) software includes supervisory software for the system and control software for individual instruments in addition to the instruments’ individual software from their respective vendors; 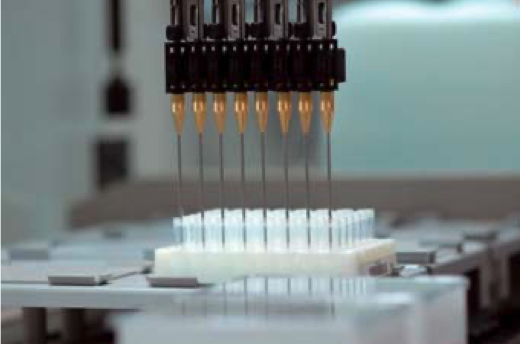 After inversion the separated samples are transferred to the purification step

it communicates between the instruments and co-ordinates all of their activities. A system process supervisor (SPS) software application was also developed and this serves as the LIMS of the facility, interfacing with individual instruments’ supplied LIMS as well as pulling all the different instruments together. The SPS also interfaces with STRLAB, a client-supplied LIMS, which manages sample submissions and result analysis processes.
“The software is really what makes this whole thing tick, and it’s all Tecan software,” explained Arnold Greyling, Technical/Support Manager of the SAPS FSL Biology Unit. “We’re using Freedom EVOware® software for the liquid handling systems, but then each of our labs or subportions of the labs is run by its FACTS software and then, to complete the integration between the different labs and the FACTS installation, Tecan created a top level SPS application.”
The system’s dynamic task scheduling is essential for eliminating dwell time and reducing the casework turnaround time, by ensuring that programmed tasks are carried out at the optimum rate and actively rescheduling according to available system resources. Different parallel processes can be simultaneously performed and continuous loading of plates, use of alternative devices or running emergency samples is still possible, without interrupting the process.
The in-built autonomous management process is capable of running for 24 hours a day, every day of the year, so staff can be more usefully employed in casework management (front end processes) or analyzing and verifying results and data (back end processes), depending on their expertise. This means that automation will not mean loss of jobs for staff at the FSL – if anything, the laboratory may need to employ more people, as Director Pierre Joubert, head of the SAPS FSL Biology Unit, explained: “The kind of staff that were previously responsible for the main day-to-day activities, such as DNA extraction or PCR set-up, can be redeployed to perform evidence recovery and sample submission to the GSPS – the sharp end of the system. We actually need more people just to feed the system! The beauty of it is that many of our staff will now be given more interesting things to do, it’s about letting humans do what they do best and letting machines do what they do best.”

A smaller scale automated sample processing system has also been built in South Africa, which will deal with DNA typing of reference blood samples only, while this new GSPS is expected to process the majority of the country’s crime samples. It will bring a number of important advantages to the SAPS, in addition to massively increasing the FSL’s sample throughput and improving the quality of the analyses. The improved casework turnaround times will help to produce investigative leads from cold hits as well as minimizing a criminal’s potential window of activity, allowing speedier apprehension of criminals, exoneration of the innocent, prevention of crime and, in the long term, considerable cost saving. 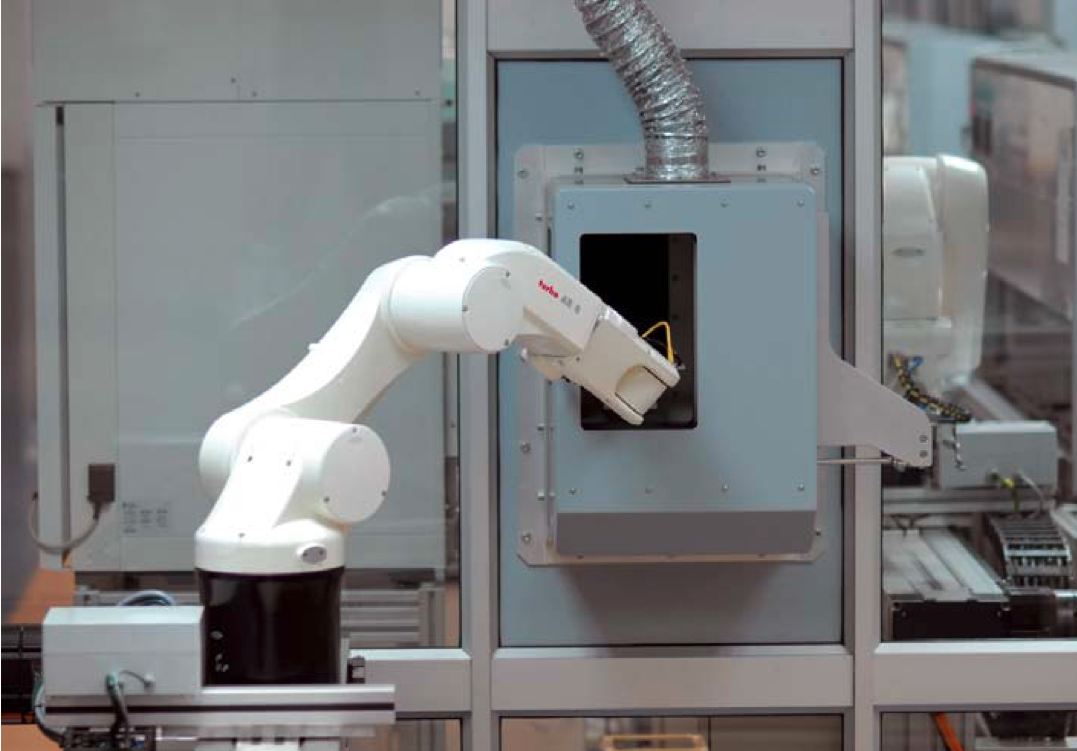 cross-contamination: the robotic sample indexing lab, the DNA extraction and PCR set-up lab, and the DNA amplification and fragment separation lab. It is vital that every sample transfer step is carried out in a safe, accurate and precise manner in order to minimize cross-contaminations.

Samples are initially transferred into barcoded, robotic sample indexing tubes and then sorted according to type (e.g. semen, or blood and similar bodily fluids) by a selective compliance articulated robot arm (SCARA). Precise sample sorting is a critical first step and it must ensure that samples from recovered evidence are securely and accurately transferred to predefined well locations in laboratory sample plates for downstream automated processing, while maintaining full sample traceability.

Samples are transported to the second laboratory area, where cellular material from the samples is resuspended into a second plate and lyzed for DNA isolation. The samples from two 48-well plates are then transferred into a 96-well plate for DNA extraction. These steps are designed to achieve reliable, automated DNA purification from up to 96 forensic samples.

The technologies used provide uniform DNA recovery and purity across the 96-well plate, with no

detectable cross-contamination between samples, allowing effective removal of PCR inhibitors. During these processes, the robots need to be able to repeatedly deliver samples to a range of high density microplates; provide full flexibility for performing complete processes including plate replication, serial plate dilutions and in-plate serial dilutions; and provide fast and automated interchange between fixed tips and disposable tips according to the process required. Real-time PCR set-up is performed through an automated pipetting system, which allows reproducible delivery of template DNA, DNA primers and other components (buffers, nucleotides) that are typical of a DNA amplification reaction mix. DNA solutions are automatically normalized to a constant concentration based on information obtained through real-time PCR.

The plates undergo DNA amplification using thermal cyclers and fragment separation processes. For real-time PCR, the quantitative relationship between the amount of

starting target sample and the amount of PCR product at any given cycle number is determined by detecting specific nucleic acid amplifica- tion products as they accumulate in real time.

For the GSPS, this process has to be robotic-amenable and capable of worklist import and data export capabilities. Fragment separation is carried out using capillary electrophoresis, with an automated pipetting system that allows reproducible delivery of amplified DNA, other components (buffers, internal lane standards, formamide) and size standards, in a predetermined pattern. Fragment separation plate assembly requires an instrument to assemble electrophoresis ‘sandwich’ plates containing amplified DNA into a carrier plate. Fragment separation data are then transferred for analysis and verified, and/or transferred for repeat or new analyses. A number of secondary processes are also involved, including a sample storage, retrieval and delivery system; short-term sample archive management; robotic sample conveyance; inter-laboratory pass-through chambers; lab plate cover management and an emergency shut-down and recovery procedure.

…and out the other

The DNA profile generated by the system is then analyzed by humans and used for police work and court cases. Once the results are approved, the so-called expert witnesses – the same people that initially prepared the samples – will present the data in court. 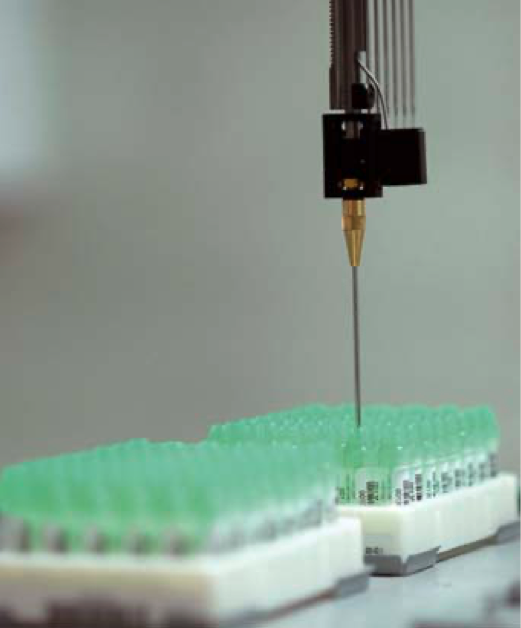 Lysis buffer is added to the samples 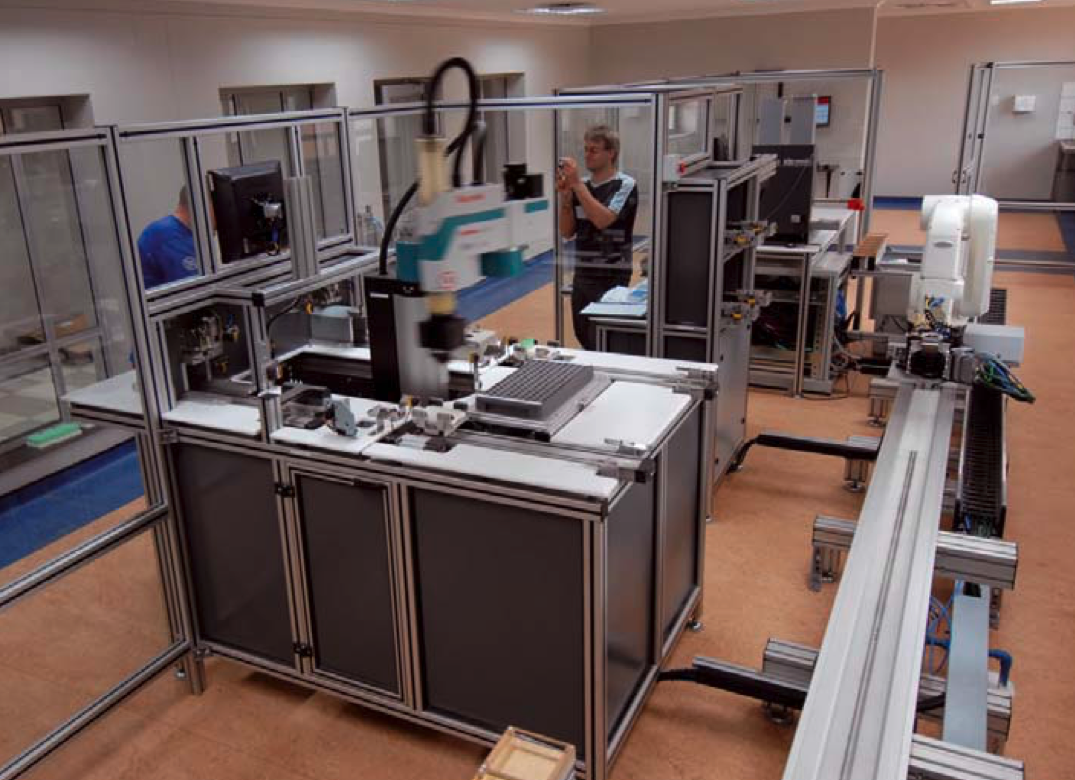 Bottom: The RSI workstation is busy sorting the samples